Rapidly prototype and develop with the exactly same code web apps for Windows, OS X, Linux and UNIX and use them from iPhone, iPad, Windows Phone, webOS, BlackBerry, and Android devices, just like CrossUI RAD but OpenXava uses Java and it's open source.

Write just the domain classes in plain Java. Get a business application ready for production. 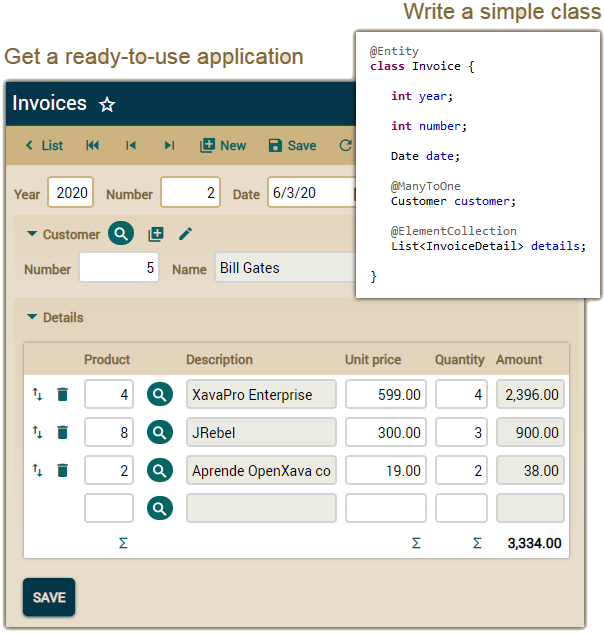 "I think OpenXava is an extraordinary tool, it makes reality a fantasy, that is MDD and at the same time works like a RAD, all this using Java."

"I've been developing software for close to 40 years and I am very impressed with OpenXava, not only with the ease in which I have rapidly developed a functional app, but with the extensive customizations that can be applied to achieve more complex behavior and desired look."

"The real catch about our experience while developing with OpenXava was the speed of development without compromising the quality."

"I must say: my compliments! ... I have actually quite a lot of experience in UI automation. So it takes a lot to impress me. And I am impressed."

"I've been able to put together more functionality in my initial 6 days of starting to learn OpenXava (and I know nothing about Java itself - yet) than I was able to accomplish in several weeks of either RoR or Laravel, and I know a bit of Ruby and PHP."

"I have been looking for a logical, understandable, simple approach to web tools for years now and OpenXava is the first thing I have found that fits that bill. Most tools like VisualStudio Web App are so extremely confusing and so many moving part that the learning curve is insurmountable."

"Openxava is brilliant. I used Wavemaker as a UI before, and that was really hard work."

"OpenXava for me is an exceptional tool, saving us time, made it standard interfaces, imposed a criterion of unique development in the organization."

"I am using OpenXava and finding it wonderfully refreshing, as someone who needs to program in Java with no Java knowledge it is a wonderful tool so thanks!"

You only write the code for your data structure and business logic with Java. You do not write HTML, JavaScript, CSS, SQL, etc. The user interface and the database logic are automatically provided.

If you know basic Java and JPA you're already an OpenXava developer, you don't need any more to create complete applications. The OpenXava bundle is prepared for a rapid startup.

Flexible enough to solve any case you'll face developing a business application. For the user interface OpenXava has a bunch of annotations to define the layout of the view in a high abstraction level, this is enough for most cases. For the behavior it has a controller framework to define your own behavior for a certain part of the application, or even for overwriting the standard behavior of the whole application. Moreover, you can modify the way any part of the user interface is generated by defining your own editors for certain types or properties. Finally, you can program by hand the user interface of any module of your application using JSP, HTML or JavaScript.

Use your favorite platform

Browsers: Chrome, Firefox, Edge and Safari. Databases: Any supported by Hibernate, that is Oracle, DB2, AS/400, Informix, PostgreSQL, MySQL, MS SQL Server and practically all relational databases. Operating systems: Any with Java 8 (or better) support, that is Windows, Linux, Mac, Unix, AS/400, z/OS, etc. Application servers: Any with support for Servlets 3.1 (or better), including Tomcat, JBoss, WebSphere, Glassfish, WebLogic, etc.

LGPL license that allows you to develop commercial applications without paying any fees.

The most used Java domain-driven framework

250,000 downloads. 60 authors. Thousands of threads in the forums. Hundreds of applications developed. Hundreds of professionals in LinkedIn with OpenXava experience.

Free support in community forums, though they have thousands of threads all questions are answered. Moreover, there is professional support available.

Based on Java standards

Thus you can migrate your current Java code easily to OpenXava, and vice versa. You can use any Java tool for OpenXava. Your Java developers are already OpenXava developers. OpenXava projects are Maven-based. You can use IntelliJ, NetBeans, Eclipse or Visual Studio Code as IDE. OpenXava works nicely with Java 8, 11 and 17. OpenXava is based on Java Persistence API (JPA), Dependency Injection for Java and Bean Validation standards. OpenXava supports: JSR-338, JSR-317, JSR-303, JSR-330, JSR-220, JSR-153, JSR-311, JSR-339 and JSR-370.

6 releases/year, half of them maintenance releases (just with bug fixes). Since 2005.